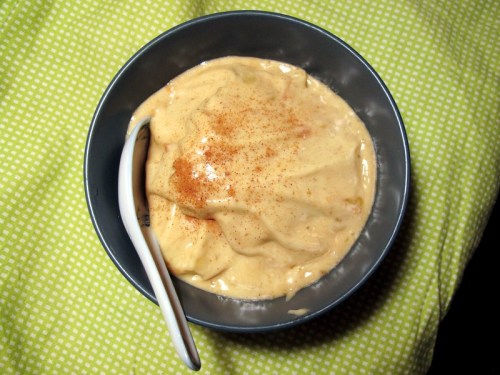 There’s been a cool, rainy spell in Shanghai lately, but the weather people tell us summer isn’t over yet. As long as I’m still comfortable in shorts, I’m going to keep letting myself indulge in the best part of summer: ice cream. (Which might explain why I’ve disturbingly gained back half the weight I’d lost back in June…)

So I was super excited to discover, while going through my facebook feed one day, someone’s reposting of a “healthy” ice cream recipe. It called for a whopping — ready? — 3 ingredients: frozen banana chunks, peanut butter, and honey. I’d made mung bean popsicles and PBJ froyo pops earlier this summer, but there’s nothing like the indulgent creaminess of soft ice cream. Since those ingredients are foods we always have around at home, I tried it that very night.

The first attempt failed as my impatience led me to use banana chunks that weren’t yet quite frozen, but a couple more tries in the following days (executed by Sean, who jumped on the idea in an instant) finally led to success. The result is a cold, creamy, smooth dessert that tastes and feels like soft serve — and is actually good for you!

I’d known that bananas are often used in lieu of eggs in vegan baked goods, but had no idea they could come out so deliciously creamy when frozen. Even though ripe bananas are used, the banana flavour isn’t overpowering. With no dairy ingredients, this recipe is lactose-intolerant friendly, and vegan-izable if you ditch the honey — which you totally could if the bananas are ripe enough. We spiced ours up with cinnamon and vanilla extract, and plan to try it with some dark chocolate chunks next time.

[Edit: Tried it with the chocolate tonight, FAIL! Even though we nuked the chocolate for 20 seconds before adding it to the mixture, it solidified right back up upon contact with the frozen banana. We ended up with tiny bland bits of chocolate in the ice cream which killed the texture and did nothing for flavour.]

We lost our faithful blender of nearly two years on our third ice cream-making attempt. We’d been meaning to replace it for weeks (months) now, as the hardened grime on its sides became impossible to ignore, but it’d been working fine up until that fateful evening when it began to moan and then slow down. For 99 RMB, it couldn’t be beat. RIP.

1. Peel bananas, slice each into 10 chunks, and place in freezer for 3+ hours or until frozen.
2. Remove from freezer and microwave on medium-high for about 1 minute. This will make it easier to process.
3. Add bananas, peanut butter, and other ingredients to blender/food processor and blend until creamy, like soft serve ice cream. You will need to stop and scrape the sides down several times, or push it down with a spoon as it is blending. Don’t worry if small chunks of banana remain; these are delicious as they have the texture of hard ice cream. Do NOT spend too long on this step as the mixture doesn’t stay solid for long.
4. Transfer to a bowl or two and enjoy immediately!

Filed under eating in